When you are in Sittard-Geleen, you are in the middle of a sea of green, with breathtaking woods, exquisite city gardens, and lovely parks all around you.

You will feel like you've stepped back in time when you explore this rolling South Limburg landscape. Stroll along babbling brooks and experience the rich abundance of plant life in this former marshland. History will come to life when you stroll past Castle Grasbroek. In this area, you will find many ancient mottes, old earthen defensive mounds, some going back a thousand years!

In these broadleaf woods at the northern edge of the South Limburg loess area, you will find the source of many of the springs that bubble up to become the network of tiny brooks and streams that flow together to become the Hondsbeek. This is in part what gives the area its vast richness of plant life, like golden saxifrage, oxlip, and large bittercress. The name Grasbroek, containing the Dutch words for 'grass' and 'brook,' is an indication that this area once was marshy. At the higher elevations, herb paris, wood melick, and small teasel can be found. The woods are home to a rich variety of birds, like golden orioles, song thrushes, and nightingales.

In this nature area, you will find a motte dating from the tenth century. This type of defensive fortification most likely was the foundation for a wooden defensive work. Another motte close to Castle Grasbroek once supported an outer bailey. That bailey, destroyed around 1540, was the forerunner of the current Castle Grasbroek, which dates from the end of the 16th century. Look for the remains of its predecessor on the hill just north of the Kattenbroek stream (a branch of Hondsbeek).

At the northern edge of Limburg's loess area, you will find lovely Limbricht Woods, made up largely of deciduous trees over 75 years old. In some places poplars, black locust trees, and maples are being removed to make way for the indigenous shrubs and brush of olden times. The woods are also home to flowering plants like spotted arum, wood anemone, and moschatel.

And countless birds come to nest here, like wood warblers, nightingales, golden orioles, chiffchaffs, and many others. Buzzards and hawks patrol the skies. The woods are being managed to increase the amount of dead wood. To do this, a number of American Oaks are being 'ringed': A circle of bark is cut away from around the trunk, so that the tree dies, its dead wood becoming a rich habitat for the organisms at the bottom of the forest ecosystem, particularly fungi and lichens.

Passing through these woods on the way from Geleen to Schinnen, you will be glad if you stop in at the nature information centre located in the former Plinthos brickworks building. Don't miss the opportunity for an excursion into the nature area here. The paths snake along coniferous and deciduous trees, meadowlands, and a marsh forest. The meadow paths will take you past orchards with dwarf fruit trees outlined by windbreaks. In early spring, you can see a number of unusual birds in the valley, like the great spotted woodpecker and the kingfisher. And if you look down and keep your eyes out, you may even see the rare and diminutive Desmoulin's whorl snail. 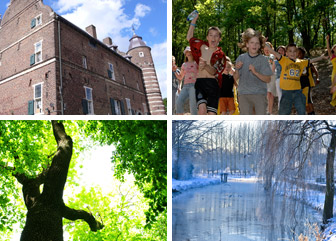 Travelling from Sittard towards Limbricht and Born, you pass through several spectacular nature areas. The IJzerenbos woods are rich and varied and particularly notable for their extraordinary plant life. Here you will find beautiful botanical specimens like the parsely-piert and the Venus' looking-glass. The animal life in the area is just as varied, from butterflies and forest grasshoppers to long-eared bats and tree frogs. Following the contour of the oak and ash woods takes you into the adjoining wooded areas, the Limbricht Woods (a birdwatcher's paradise) and 't Hout (just below Susteren).

The Asbroekbos is a woods in development, springing up on former agricultural land between Munstergeleen, Sittard, and Geleen along the restored course of the Geleen brook. It is a part of the De Graven landscape park. The woods and the brook valley are an ideal habitat for a variety of plants and animals. In the coming years, this area will continue to change as the woods and the nature areas develop.

The Memory Forest offers visitors the opportunity to create a lasting monument to a momentous event such as a birth, marriage, anniversary, or death, by planting a tree. The ashes of loved ones may also be scattered in the woods here. This can be truly called a forest with a human soul.

The first section of the Memory Forest was established at Duuster Gats in December 1999. A further 115 trees were planted in December 2012 on an adjoining strip of land in the direction of the Chapel of St. Rose, bringing the Memory Forest to a total of 320 trees. When you sponsor the planting of a tree, you receive a certificate with the tree number and a description of the event your tree commemorates. This project is helping keep the area green and get people involved in local nature conservation.