If you have a thing for castles, you'll have enough things to see in Sittard-Geleen. From breathtaking ruins that fire the imagination to exquisitely restored fortresses, every one is an imposing monument with an exciting story behind it. Tip: to make a day of it, visit the castles by bike and enjoy a beautiful tour of these spectacular surroundings on the way.

The Castle Park is the area around the impressive ruin of Castle Born, which was destroyed by fire in 1930. In the castle's glory days, the verdant castle grounds here included a vegetable garden and a pleasure garden of park-like proportions.

The first reference to a castle at Born dates from 1150, which must have been situated in the immediate vicinity of the present ruin. The last inhabitants of the castle were the family Barbou van Roosteren, who lived there up to the fire of 1930. In 1956, the municipality of Born purchased the entire complex, including the gatehouse and groundsman's residence. In 1969, the Munsters family converted the grounds into the animal park it is today, keeping the area as true to its medieval situation as possible. In 1985, its operation was continued by the Castle Park Born Foundation. After restoration in 1990, the gatehouse was taken into use as a town hall. The groundsman's residence was renovated in 1997.
More about Castle Park Born 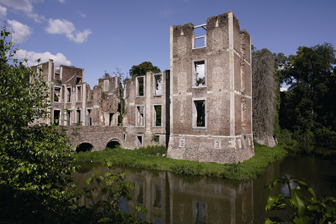 Castle Limbricht has a long history, going back to the 10th century, when there was most likely a wooden fortress on this site, later replaced by a stone building. Excavations have revealed that in the 12th century, there was a donjon, or inhabited tower, here, which was rebuilt around 1250. The castle was razed to the ground in a siege in 1579. Castle Limbricht was also the site of a law court, and it was here that the last witch trials in the Netherlands were conducted, in 1674. In 1794, the castle was commandeered by the French. After a brief interruption, the family of Michiels van Kessenich became the owners of the castle in 1810, and it took on the function of hunting lodge, as a result of which it was no longer permanently occupied. In 1814, the castle served as an emergency hospital for many sick and wounded French soldiers returning from the battle of Leipzig. Many of them are buried in the French cemetery in Limbricht. During the First World War, the castle served as an internment camp for German prisoners of war who had been taken as smugglers.

The castle complex consists of a fortress and an outer bailey (in essence a castle farmhouse) surrounded by a moat. A chronogram on the main gate gives a date of 1622 as the year of construction. The castle complex was restored by its current owner, the Castle Limbricht Foundation, in the second half of the last century. The outer bailey is used as a conference and meeting centre, but can also be used for parties, dinner receptions, and even bowling.
More information about Castle Limbricht 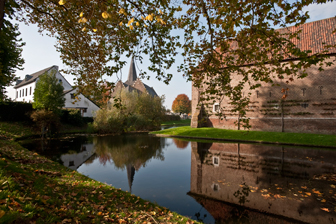 Castle Obbicht was built in 1780 on the site of a medieval fortress. The castle has a unique octagonal centre construction. Its moat is also unusual, in that it is fed by the water of the Kingbeek. At the spot where the moat water flows back to the Kingbeek, there once stood a house with a paper mill dating from 1699. This house was the birthplace of noted writer Pieter Ecrevisse. After a devastating fire in 1954, the castle was comprehensively restored in 1988, thanks to the dedication of the current inhabitants.
More information about Castle Obbicht 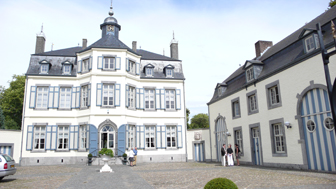 The site of Wolfrath was first referenced in the twelfth century, when it was most likely a farmhouse. A reference from 1386 describes it as a fortified house. The castle as we know it today was built by order of Philip Hendrick van Bentinck in 1628. The Van Bentinck family owned the castle until 1802, when it was confiscated by the occupying French.

It is built of brick, and contains a great and small hall. The great hall still has the original hearth from 1628, and inside you can also find pilasters, coats of arms, lion corbels, Louis XVI mantelpieces, medallions, and plasterwork. There is also a moat around the outer bailey with a younger bridge over the moat leading to the gate. Originally, there would have been a drawbridge at this spot. Around the castle is a park with two driveways. The castle underwent a restoration in the year 2000.
More information about Castle Wolfrath 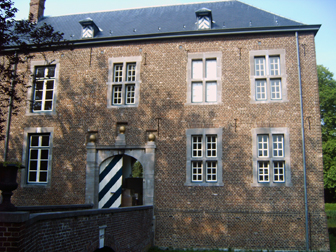 Between the parishes of Born and Limbricht lies Castle Grasbroek. The current castle is a two-storey square house with basement, somewhat diminutive in stature. The castle has Dutch gables at the shorter façades, with no fewer than 63 embrasures. At the east corner of the castle, there is a round, brickwork staircase tower with ornamental band courses of marlstone. The wooden core of the staircase tower is a tree trunk worked into the original construction over 400 years ago. At the west corner, diagonally across from the staircase tower, the castle has a turret tower.

The castle was originally surrounded by a moat, which today is drained and barely visible at all. The date anchors on the outer wall indicate a construction year of 1596. The upper section of the staircase tower seems to have been raised in the first half of the 17th century, but without the marlstone banding. The purlin roof and main rafters are still from the original construction. Castle Grasbroek is in the middle of some truly beautiful landscape and is definitely worth a visit. 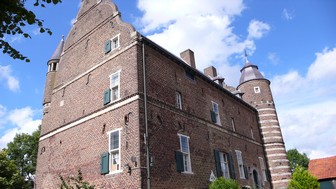