In the historic city centre, you can find five different churches - all within sight of each other and each a product of its own age. Their towers define the city skyline. A visitor to the city is always in the shadow of a church tower.

As you approach the historic city centre, the 80-metre tower of the Great Church looms from afar. The Great Church's proper name is St. Peter's Seat of Antioch, and it is devoted to the Apostle Peter. Some form of church has stood on this spot since around the year 1000. The bulk of the church you see today was built from around the end of the 14th century to the middle of the 16th century, and is a regional Gothic style. The church served as a collegiate church and parish church, and underwent a major restoration in 1985.

The Great Church can be visited from 9 AM to 12 PM and from 2 PM to 4 PM. The church is closed Mondays. 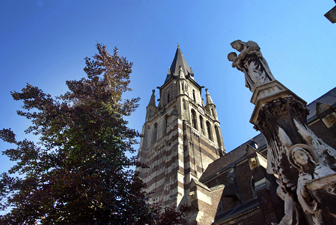 What is today the church square was a cemetery until the early 19th century. As was the custom in the age, important people were buried in the church, while other faithful were buried in the yard around the church (a practice that survives in the use of the word 'churchyard' as an alternative word for cemetery). Napoleon prohibited the practice of burying the dead in and around the church, and after that Sittard's dead had to be buried outside of the urban area. At that time, a new graveyard was established outside the city walls. 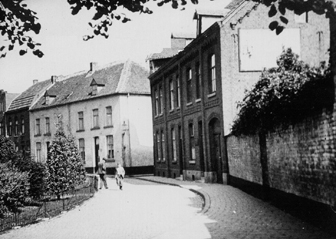 The Basilica was the first Dutch church (in 1883) to be bestowed the ecclesiastical distinction of Basilica. Following on from the 'great' basilicas in Rome and Assisi, by the end of the 19th century the Church was also extending the title of basilica minor (small basilica) to churches of distinctive importance and aesthetic value. The Church of Our Lady of the Sacred Heart was built in the Neo-Gothic style, a style typical of the period 1860-1910. The nineteenth century saw a revival in the interest of the architecture of the Middle Ages and its Gothic cathedrals. The church is built in the form of a transept basilica. It has an ambulatory with apse chapels. At the transept, there is a high tower with embellished, polygonal smaller towers at the corners of the bell level. This tower occupies a position of importance on the Sittard skyline rivalled only by the Great Church. The word basilica is derived from the Greek word meaning 'royal' and usually used in combination with other words like hall or temple. The church was built as a church of pilgrimage.

The Basilica can be visited from 9 AM to 12 PM and from 2 PM to 4 PM. The Basilica is closed Mondays. 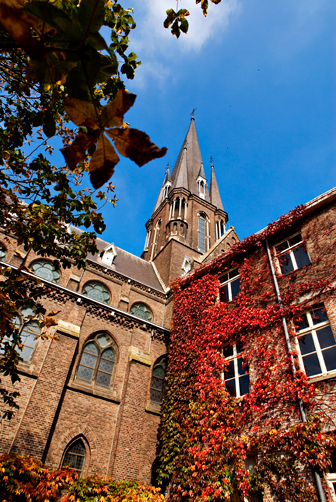 The steady stream of pilgrims to the Basilica very quickly necessitated the construction of a place to receive them, where they could follow the services in the church through the open doors. This became the Mariapark. It was built in the form of a cloister walkway against the Basilica in 1891, and features an altar and the fourteen stations of the cross. Like those of the Basilica itself, the walls of the Mariapark are also richly decorated. After a recent restoration, this area is once again in use as a meeting and gathering space.

The Paterskerk is dedicated to St. Michael, the Archangel who was called to Sittard (in the form of the Dominicans) to defeat the diabolical dragon of the Reformation. The church was built by the Dominicans and consecrated in 1668. Its exquisite façade is a fine example of Southern Netherlands Baroque. This variation on Baroque was also used for the Augustinian and Jesuit churches in Maastricht, and is found primarily on churches in Liège, Leuven, Brussels, and Antwerp. The interior of the Paterskerk is similarly impressive, with its ornately decorated panelling in Renaissance style, pulpit, its choir panelling, and the altar decorated in stunning Baroque style.

The Paterskerk can be visited from 9 AM-12 PM and from 2-4 PM. The church is closed Mondays. 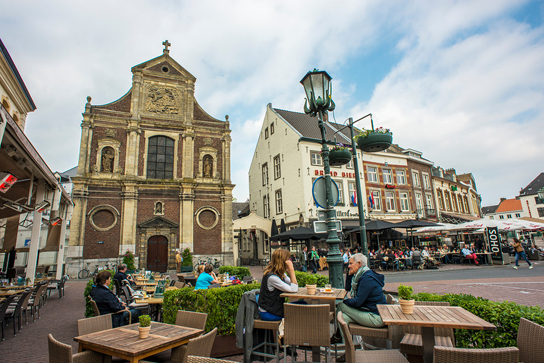 In 1287 there was already a mill built on the eastern bank of the Geleenbeek. In 1291, a second mill was built on the western bank. However, the fundamental elements of the current complex date from 1797. The western mill was the birthplace of Johannes Andreas Houben, a Passionist priest later canonized under the name Charles of Mount Argus. The chapel is visited by many pilgrims every year. 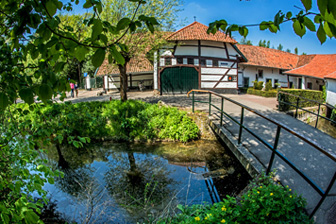 St. John's Vault in Geleen dates from 1699. After its last restoration in 1985, it was reopened as a prayer chapel, allowing devotees to now use it for baptism or anniversary services. The building is also used several times per year as exhibition space or for small concerts. St. John's Vault is available for any activity in keeping with the spirit of the building. 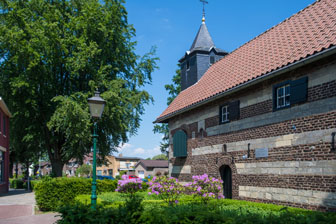 Saint Rose is the patron saint of the city. It is said that it was she who freed the city from the grip of the black plague in 1671. St. Rose's Chapel atop the Kollenberg is dedicated to her. When the chapel was built, it was quite some distance from the built area of the city as it was then. The chapel was built at a crossroads, as a result of which it could be reached from four different directions. Curiously, there are no known archives or plans for the construction of the chapel in existence. The chapel must have been built somewhere between April 1671 and April 1676. Rose was canonized in April 1671, and permission would never have been granted to build a chapel for a person who was not (yet) a saint. In April of 1676, the hostilities broke out that ultimately resulted in the destruction of much of the city. During the war, construction would have been impossible, and in the years thereafter all financial resources would have gone into the reconstruction the city. The only indication of the year of the chapel's construction is the date of 1675 on the front of the church. The chapel is now part of a highly recommendable walking route. 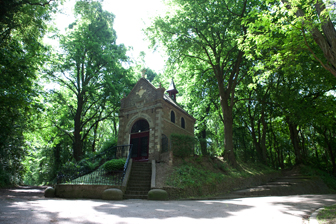 St. Salvius is the name of two churches in Limbricht. In 1922, the new church was built in the current village centre, based on a designed by Jos Cuypers and his son Pierre Cuypers Jr. This church replaced the old church at the castle. The old church, however, is still referred to as the St. Salvius Church, or simply the Salvius Church.

The history of the old Salvius Church goes back to the late 10th century or early 11th century. The only remnant remaining of the original meeting hall church is the northern wall, built of stones from the Meuse river. In the 15th century, that original church was expanded with the construction of the current south nave in Gothic style. Marlstone was used for this south nave. The tower in front of the south nave is older, dating from approximately 1458. The 13th-century choir in late Romanesque style is connected to the north nave, and still has the original dome construction.

In the course of a renovation between 1977 and 1984, wall murals were discovered in the choir; dating from around 1300, these are the oldest wall paintings ever found in a village church in the Netherlands, and can currently be viewed by visitors. Also found in this church was a brass box containing bone fragments of St. Salvius, for whom this parish is named.

The church can be visited on Easter Monday and every first Sunday of May, June, July, August, and September from 2 PM to 5 PM. Private visits can be arranged by appointment on any day of the week. To make an appointment, please phone the guide on +31 (0)46-4515908. 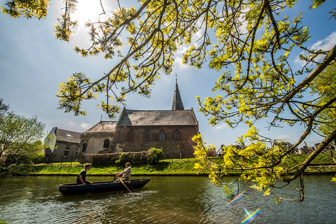